From my Geology News Feed: Is the Amazon Forest a Carbon Emitter or Sink?

The article discusses a research project to understand the carbon balance in the Amazon. Results do not yet clearly say whether the Amazon sucks in as much carbon as it emits through organic decay and deforestation but scientists feel that the rate at which it is being logged (about 8000 sq miles per year!) a tipping point i.e. when carbon emissions from the Amazon will exceed carbon sequestration may be approaching if the current rate of deforestation is not slowed down. Worldwide deforestation contributes to about 20% of greenhouse gas emissions, so preservation of forests is an important component of fighting climate change. The figure below shows the change in forest cover over the last few years countrywise.

India has added about 700,000 acres according to this figure. I confirmed this from the Forest Survey of India site. India has added about 2797 sq km of forest going by the latest census in 2003. This compared with the earlier census of 2001. From a climate change mitigation point of view this must be seen as a positive trend. All this growth of new forest owes much to the National Afforestation Programme which aimed to increase total forest cover by about 7-8 lakh hectares or about 7000 sq km by the end of around 2006. The latest census figures are not available to me so I cannot report on whether this target has been reached.

How does all this increase in forest cover impact wildlife and biodiversity. On this front the news is not good. I looked at some of our core forests, the ones which have been given tiger reserve status. These are generally forest areas which are quite rich in biodiversity and preserve contiguous areas of dense tree cover. Again I used a report prepared to assess the forest cover changes (warning: 54 mb download) in and around tiger reserves by the Forest Survey of India. The census was up to 2002. It shows not much forest is being added to these critical animal habitats. Only about 25 sq km of new forest growth in and around tiger reserves has been recorded and that to in just 4 of the 28 tiger reserves. There has been a net decrease of about 94 sq km of forest from within the tiger reserves since 1997 and about 124 sq km in the immediate surrounds of the reserves during the same time span. Moreover there are signs that the forests are degrading. For example about 270 sq km of dense to moderate dense forest became open forest i.e. forest with canopy density of 10-40%. Overall forest cover in and around tiger reserves amount to about 55, 000 sq km. Total forest cover in India is about 670,000 sq km (6.7 lakh sq km) by the 2003 census. It helps to look at a specific case in detail. The figures below shows a map of the Nameri tiger reserve in Assam. Compare the 1997 map to the left with the 2002 map to the right. The green represents dense to moderate dense forest while the yellow is open forest. 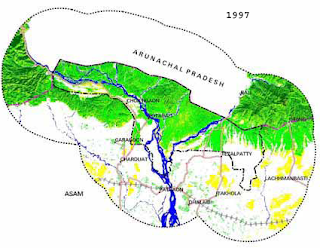 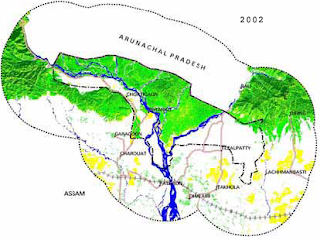 You can see a significant decrease in the green and yellow patches in the 2002 map. Nameri lost about 22 sq km of forest from 1997 to 2002. One might argue these are slight dated figures and the forest cover may have increased in the last several years. I hope that is the case but I am not too optimistic. There are conflicting views on whether the recent increase in forest cover reported in the 2003 census is a real increase due to afforestation or an artifact created simply by improved resolution of satellite images used in the audit i.e. previously uncounted parcels of forest are now being mapped due to improved resolution. Afforestation has probably not improved the situation near most of the tiger reserves in recent years. Below satellite image contains data from 2003-2006, more recent than the Forest Survey of India data I presented and it shows no signs of any new forest growth. 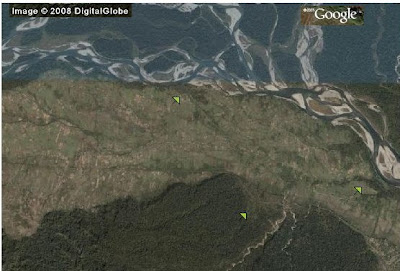 Compare this image with the 1997 map. In this close up, around the arrows, increase of agriculture near the fringes and thinning and deforestation south of the river has completely stripped the land of forest. Here pressure for land and conversion of forest to agriculture use seems to be increasing. In my last post I showed a similar situation in the Gir forest. Most reports one reads today document increasing degradation of critical wildlife habitats, so its a fair guess that afforestation programs are not being successfully directed towards these core forest areas.

All this gains importance in the context of the recent announcement of allocating Rs 600 crore for the tiger protection programme. Much of the money in this programme is said to be for rehabilitation of communities living around tiger reserves and improving security infrastructure to combat poaching. That is welcome news since as seen in the images, human activities around core forest areas eventually lead to deforestation and forest fragmentation. The situation depicted in the above image of Nameri reserve offers a test case for the ongoing afforestation programmes. South of the river what used to be contiguous tracts of forest have disappeared, fragmenting the forest in to isolated blocks. It is here that afforestation by providing migration corridors for animals, in the above case by recreating contiguous forest cover south of the river, can make a real difference in improving wildlife habitat. The best chance we have of saving wildlife and biodiversity is by concentrating on the core forest areas that have been preserved so far and have been least affected by farming and logging concessions. But the data on afforestation done so far suggests otherwise. For now it does appear that afforestation is more a method to simply increase "forest" cover to meet government targets. Plantations are usually carried out on degraded forest land i.e land under forest department jurisdiction which has currently no or little tree cover with no due importance given to either biodiversity or whether such plantations are contiguous with critical wildlife habitats. I am always amazed by this utter disconnect between various government organizations. Our wildlife biologists are as well trained as any in the world. They must be recommending conservation plans for wildlife habitats. Yet most afforestation seems to be taking place away from such habitats and judging by reports and my own personal observations at least in Maharashtra, afforestation means planting mono-culture. These isolated patches of green do get picked up by digital image sensors aboard our remote sensing satellites and get converted into estimates of "forest cover" increase. But they by and large are not helping in preserving our biodiversity.