Sometime back I had posted a graphic of Indian sedimentary basins and the potential of shale gas from these basins. Currently India has reserves of about 38 trillion cubic feet (Tcf) of conventional natural gas i.e. gas stored in pore spaces of coarser permeable sedimentary rocks like sandstones.

I had mentioned that shale gas i.e. natural gas trapped in very fine grained, impermeable shales might add substantially to the existing conventional natural gas reserves. I did not have any numbers to put out at that time.

Now the U.S Energy Information Administration (EIA) has come out with a report (51 mb) on global shale gas potential that includes some Indian sedimentary basins as well. The report has been prepared for the EIA by Advanced Resources International, a company based in Virginia, U.S.

About 70 shale formations from 48 basins in 32 countries were studied. Here is the global summary in terms of shale gas potential. The report only partially estimates shale gas resources since it excludes Russia and the Middle East. It also excludes offshore basins and many other onshore basins for which data is not available:

Do read the summary and the report (51 mb) to get an idea about the methodology for estimating shale gas resources.

For India, data adequate enough to generate estimates of shale gas was available from 4 sedimentary basins. These were from the Cambay Basin, the Krishna Godavari Basin, the Cauvery Basin and the Damodar Valley Basin. These basins are estimated to contain about 63 Tcf of recoverable shale gas.

There are many other sedimentary basins which remain relatively unexplored for their shale gas potential.

Image below shows the assessed sedimentary basins along with other basins which are though to contain shale gas but for which adequate data is not yet available. 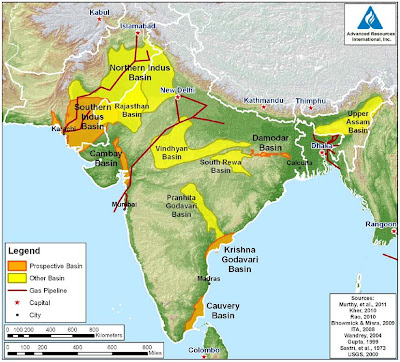 Below is a basin-wise breakdown of the shale gas estimates along with graphics of the basin structure and prospective blocks within the basins.

This is an elongate intra-cratonic rift basin of late Cretaceous-Cenozoic age situated in western Indian state of Gujarat. The formation of interest is the Palaeocene-Eocene Cambay black shale. Technically recoverable shale gas is estimated to be about 20 Tcf. 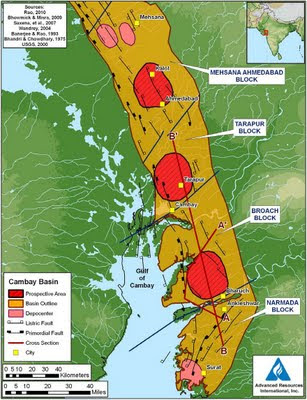 A Late Permian to Tertiary age basin in eastern India consisting of a series of horst and graben. The prospective formation is the Permian age Kommugudem shale. Technically recoverable resources are estimated to be about 27 Tcf. 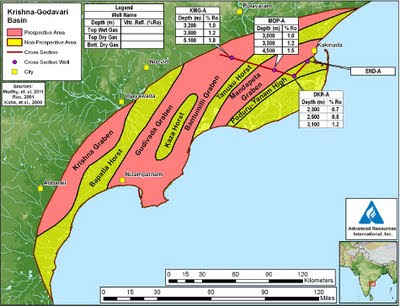 The Cretaceous-Cenozoic Cauvery basin in south eastern India is another basin with horst and graben structures and prospective shales. The formations of interest are the early Cretaceous Andimadam Formation and the Sattapadi shale. Technically recoverable resources are about 9 Tcf. 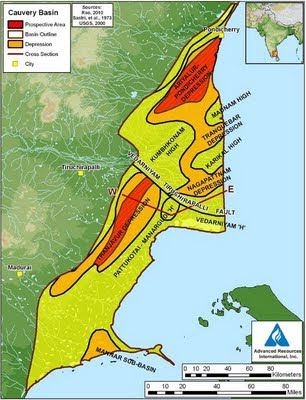 This basin is part of the "Gondwana" basins of India characterized by their mostly non-marine sedimentary fill and narrow graben structures. Although filled with mostly Late Permian to Triassic terrestrial sediment, there is a significant thickness of a marine shale known as the Barren measures, so called as it is barren of coal. The technically recoverable resources from this shale are estimated to be 7 Tcf. 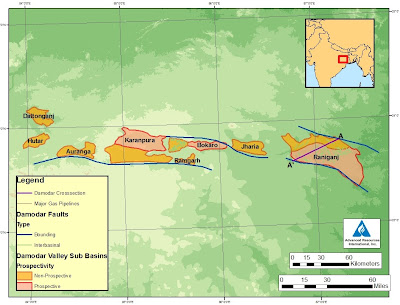 Below is a table summarizing the geological and shale gas attributes of the basins of interest. 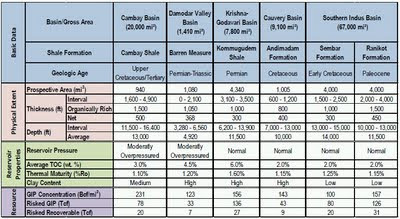 As the report makes clear, these are initial estimates (not proven reserves) based on available data on shale formations from basins that already have seen substantial exploration for oil and conventional natural gas. As more focused exploration for shale gas continues from these basins and as more basins are explored these estimates of shale gas resources will likely change.

Update [ May 17 ]: [ Just a quick clarification on terminology. In the table above three estimates of gas are given. GIP is Gas in Place and it refers to the total gas content of the shale formation as estimated from geological attributes. Risked GIP is a fraction of GIP after applying certain success factors i.e. using information available of the productivity of the formation and other factors that might limit its development. Finally, Risked Recoverable is the fraction of Risked GIP that can be technically recovered. That is the amount - 63 Tcf- I have used in this post.

There are reports in the media claiming for example that shale gas in India has been estimated to be about 600 - 2000 Tcf. These refer to Gas in Place estimates and are comparable to the GIP estimates in the EIA report. They are sometimes improperly referred to as reserves (amount of resource that can be exploited economically at any given time). These large amounts mentioned in some media reports are not proven reserves but an estimate of the total gas content stored in the formation. Out of that only a fraction will be technically recoverable.]

India produced about 1.4 Tcf in 2009 and consumed about 1.8 Tcf.  These shale gas resources as they are realized will add significantly to India's hydrocarbon reserves.

Some broad issues to think about:

1) Will a shale gas policy allowing for exploration and exploitation be put in place quickly?

2) Will concerns about leakage of fracking fluids and methane into groundwater be addressed thoroughly and transparently.

3) Besides contamination of groundwater, there is also a concern of water usage. Wells drilled into shale require large amounts of water to be pumped in during the process of fracking i.e hydraulic fracturing of the rock.  How will conflicts of water use with farmers and affected communities be resolved?

Update Jan 5 2012: In a recent assessment (USGS Fact Sheet India Shale Gas 2011) of the Cambay, Krishna Godavari and Cauvery provinces of India, the United States Geological Survey has downgraded shale gas resources from 63 tcf estimated by the Energy Information Agency to 6.1 tcf. Downgrading shale gas resource estimates is not unique to India. Revisions are going on all over the world and is probably due to the observation that production from shale gas wells falls significantly after the first year or so of extraction. So their performance over the long term may not be able to match up the initial surge.  For example, the prolific Marcellus Shale from eastern U.S initially estimated to contain 410 tcf of gas again estimated by the EIA has been downgraded to contain about 84 tcf of technically recoverable gas by the USGS.

The India revision is analogue data and was developed using estimates of ultimate well recovery and success ratios from various U.S. data. This figure might itself be open for revision as more focused exploration is undertaken in these various basins.