I'll lead you into the field photos in a minute, but I just want to comment on something else first.

Prof. Gerta Keller and her collaborators are at it again. Two new papers in the Journal of the Geological Society of India and Earth and Planetary Science Letters  have come out in recent months in support of the theory that the Deccan volcanism played a large role in the mass extinction that took place 65 mya.  The mass extinction resulted in biologically new conditions on earth and we recognize that formally by naming post extinction geological layers to represent the beginning of the Cenozoic Era.

I haven't read the papers but from following some early work of this group and the abstracts it is worth summarizing Prof. Keller's argument

1) The Chicxulub meteorite impact which is dated to around 65 mya and considered to be the main cause of the mass extinction occurred 300,000 years before the mass extinction and so couldn't have been the sole cause of the extinction. This conclusion is arrived at by studying Maastrichtian (latest Cretaceous) to Danian (earliest Cenozoic) sections near the impact crater in Mexico and Brazos river, Texas. The sections show a meter or so of sediment between the   impact breccia and the Cretaceous -Cenozoic boundary layer which is recognizable by C-13 shifts and an irridium anomaly, marking a pronounced environmental shift. Sedimentological analysis of the meter of sediment suggest normal quiet conditions of deposition and biostratigraphy suggests a time lag of about 300,000 years between the impact breccia and the boundary layer. The irridium anomaly thus points to a second meteorite impact.

2) On the other hand, the main pulse of the Deccan volcanism accounting for some 80% of lava volume erupted in the latest Maastrichtian in magnetic polarity zone C29R.  Planktic foraminifera and other ecological indicators from marine sediments spanning Maastrichtian to Danian deposited between lava flows in the Krishna Godavari basin show drastic drops in species richness, an indicator of extreme environmental stress. Formaminfera in Danian sediments between younger lava flows are represented by just a few species. These are survivor fauna. This then demonstrates a cause and effect relationship between the Deccan volcanism and environmental stress.

The mass extinction according to Prof. Keller had multiple causes, Chicxulub impact, then Deccan volcanism and then a second meteorite impact.

Most scientists working on this problem reject this scenario. This is not because they object to the premise that the Deccan volcanics would have been harmful. Their objection is to Prof. Keller's interpretation that the Chicxulub meteorite impact took place 300,000 years before the mass extinction. They interpret the meter or so sediment near the impact crater and the Brazos section as a tsunami deposit and not indicative of a long period of quiet conditions. And in many many sections spanning Maastrichtian to Danian around the world, there is no sediment between the impact layer (recognized by typical glass spherules and shocked quartz) and the boundary layer. No sediment therefore no time lag say the scientists and so Chicxulub meteorite impact coincides with the boundary layer and is the main cause of the mass extinction. Take a look at this great photo of the Cretaceous -Paleogene boundary layer at the Wooster Geologists blog.

Prof Keller argues that such sections wherein the impact layer coincides with the boundary layers are condensed sections i.e. there was no sedimentation at all in the interval between the impact and the mass extinction and therefore the two seem to appear the same! One problem has been the lack of high resolution dating which could separate these events and settle the issue.

A couple of months ago I was driving west of Pune (location in image below) and came across a road section that exposed several red clayey layers (red arrows) between lava flows. 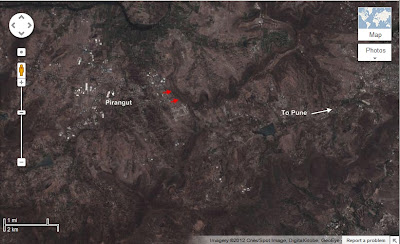 These red layers locally known as red bole have been interpreted as weathering products formed during a hiatus in volcanic activity. Some are debris and soil that formed on top of a flow which then got fossilized due to burial by the subsequent flow. Others though are weathered tuffs or ash fall deposits. They have been found to contain basaltic shards (silicate glass that forms from sudden chilling of lava) diagnostic of an explosive pyroclastic origin. These explosive ash layers settled on lava flows and in a period of quiescence that followed got altered to a clay bearing layer.

These pyroclastic layers occur at regular stratigraphic intervals throughout the main Deccan volcanic phase. Ideas about their origins are not new. There is work dating back to the late 1970's by geologists from Pune (Dr. L.K. Kshirsagar - Ph.D thesis) that had recognized the pyroclastic nature of these layers. But the environmental connection to the mass extinction was not made then. There has been more recent work on these red layers and the idea is being floated around that such type of explosive volcanism may have resulted in columns of ash being ejected tens of km up to stratospheric levels and that would have influenced global climate leading to environmental perturbations.

okay.. so finally here are the photos of these red layers. I can't say whether these represent in situ soils or ash fall deposits.

Long view of a red layer- 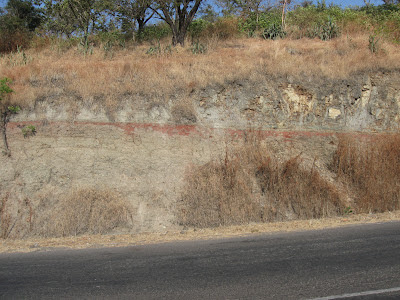 Close up of a red layer - 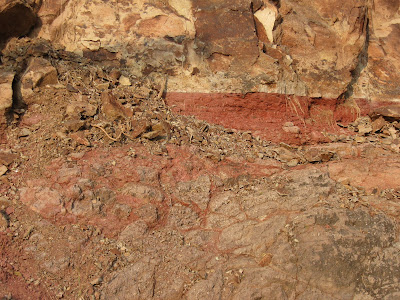 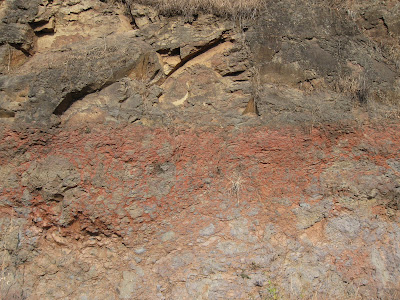 A rubbly top of a lava flow. You can see red material infiltrating through the cracks and opening between the basalt rubble. 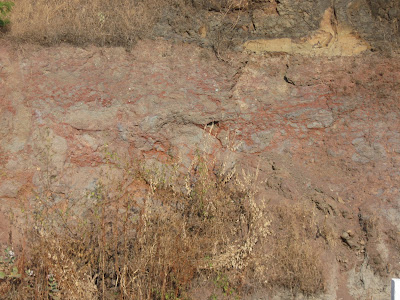 The Deccan volcanics are considered to be non explosive fissure type eruptions. Can explosive volcanic eruptions resulting in Plinian columns ( ash columns reaching great heights) form in such a volcanic setting? I am not a volcanologist but I have always associated such eruptions with classic volcanic cone formation. Have such cones and eruptive vents been identified in the Deccan volcanics?   Is this a problem of preservation, the cones being weathered away, or is it that cones need not always be associated with explosive volcanism? And were there enough of these episodes to have influenced global climate?