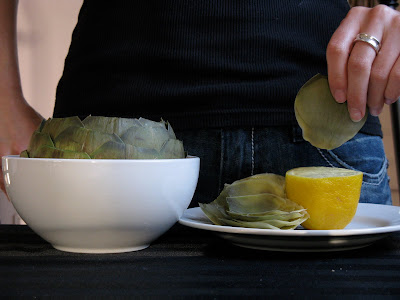 God I love artichokes... Steamed, boiled, marinated.  Artichoke hearts, spinach artichoke dip, I love them all.  I don't think I have ever met an artichoke I didn't like, although I do have a bone to pick with a particular artichoke from Costco that cut me with its spiked leaf.  (That's right, you know who you are.  Watch out, I am coming to get you.)
Why was I buying artichokes in Costco?  Well, for starters, they are in season now so they have spectacular flavor.  More to the point, I had decided to serve artichokes as a first course for a dinner party I was hosting, and so I needed Costco-type portions.  I was really excited about everything for the party.  I think there is nothing better than getting around a table with people you love, eating amazing food, and laughing yourself silly.  And maybe drinking.  A little.  I am an especially happy lady when I get to be the chef extraordinare/hostess for the evening, because it gives me an excuse (as if I need one) to create loads of goodies in the kitchen to serve my hungry, obliging friends.  Clearly a win-win situation. 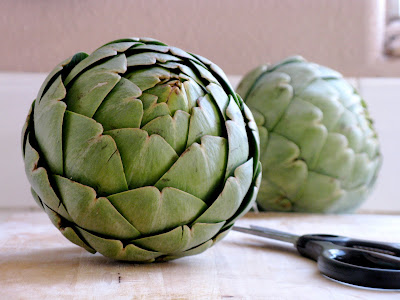 I can't really articulate why I like artichokes so much.  The tiny morsel of meaty flesh at the bottom of each leaf is hardly the basis for a meal, but the gold mine of fruit that lies at the heart is well worth the effort of getting to it.  In fact, I would fight you for it.  Maybe it is the fun of scraping each leaf with my teeth?  On a deeper level, I think the biologist in me also likes the fact that an artichoke is a sort of flower marauding as a vegetable.  Tricky, tricky. 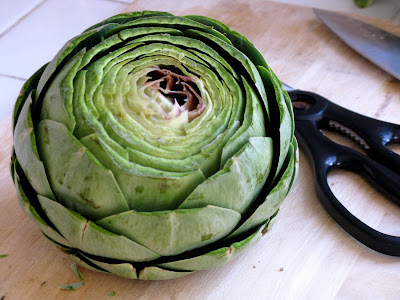 I didn't even end up buying anything on my trip to Costco, because I was so put off by that renegade artichoke that so brazenly attacked me.  This was actually a blessing in disguise, since I found these beautiful, huge, ripe artichokes at my local grocery store.  Score!  Other artichoke-hounds out there know as well as I do that a good artichoke is often hard to come by.  I excitedly took my loot home and prepped them for cooking.Read more »